All for a Friend

The tradition of friendship quilts dates back into the 1840s when quilts were constructed and signed by family and friends to commemorate occasions such as weddings or moves.  Friendship quilts were a fad along the New England coast up through the 1850s and though the popularity faded on the coast, the tradition continued longer through the areas a little more north, west and south of the US coastal area.

The tradition reignited again in the 1880s and 1890s in other areas of the US.  As families packed up to move west, friendship quilts were again presented with hugs.  And with tears, many of these quilts were packed to travel across the country in the 1890s.  Friendship quilts may not be as popular today as they were years ago, but the love with which they are given and the honor and gratitude with which they are received is as strong today as it was years ago.

The friendship quilts of the 1840s and 1850s were several blocks of the same pattern often made from scraps and embellished with signatures, verses and sometimes small drawings.  The embellishments in the 19th century were usually done in indelible ink while by the 20th century, the signature was preserved by embroidery.

Not always did the person’s signature come from that person themselves.  Sometimes they would select someone with the most beautiful handwriting to make all the signatures.  Or in some cases, a quilter would collect the fabrics from other women, piece the block and then sign the block with the name of the person who contributed the fabrics.  Some signatures were of the women themselves, but others would include their children and/or their husbands’ names.

I already mentioned that these touching quilts were often made of scraps and these scraps many times came from old clothing.  Unlike today, quilt making was within the financial reach of any woman because they were so willing to use whatever they had to make them.

It took time to make a friendship quilt.  They collected the fabric, constructed the blocks, pieced the top, put it together, quilted it then finished it.  Often times, women would construct blocks that would sit for years before they would be assembled and made into a quilt.

Piecing a block was something that came after all the other work of the day was done.  Because they didn’t have the luxury of buying clothes from a rack or a local seamstress to make repairs, these tasks had to be done before a woman picked up her quilting.

Once the top had been pieced though, joy began as women would gather to visit and help with the quilting.  You have heard about these gatherings – the quilting bees.  This was the highlight of their lives, to have this time to share with family and neighbors.

So what if you want to continue this touching tradition for a special friend in your life, what do you do?  It just takes a plan.  Probably the order of the first few steps don’t matter as much as them happening, so I’ll suggest that you start by deciding who to involve.  Are you making this for a family member and it will be a wedding quilt or a going away gift as of old?  Or is it to express appreciation to a caring neighbor who is always giving to everyone else in the neighborhood?  That will help define who you will ask to participate in this quilt project.  Don’t leave someone out though who doesn’t quilt; you always have others who are willing to help more.

Also decide what the quilt will be.  Will it be a lap quilt, a wallhanging, or a bed quilt?  Should it be a traditional design, or have a modern flair?  What about the signatures: names, messages, or both?  When deciding, obviously, you want to consider the person who receive this gift of love, but you might also want to consult those who will be contributing to it.  And when deciding on the quilt design, keep in mind the signatures.  The design should provide the space on an appropriately colored background so that the signatures stand out.  After all, that is what this quilt is about.

Also when making your plan, decide how the quilt will be signed.  Are you going to use permanent ink or do you want to embroidery the signatures?  If you are using ink, there are many possible pens on the market to consider.  One that I found mentioned more than once in my research if the Pigma Micron pen.  I have used them for Zentangle and have found them good for the special paper that is suggested for that art form, so I suspect that they work well for fabric also.  But as anything new in quilting, you do want to test this first on a small piece of the fabric.  After 24 hours, if you can wash it in mild soap as you would any quilt and it stands up, then you have a good solution.

After you decide who, what and how, it’s about piecing, quilting and finishing the quilt.  As far as signing it, you may choose to do that prior to piecing the block, or after piecing the whole top – you could call it a signing party!  Oh, and don’t forget the label.  Be sure to attach a label to the back that includes the specifics that anyone who looks at this quilt wants to know.  Here’s an example of one that I might do.

To Grandma Jane Smith, the matriarch of our family.
You are the glue that holds us together and we love you for it.
Presented to her for her 75th birthday on May 10, 2015.

When it’s finally finished, make the presentation special.  Give those who contributed to the quilt an opportunity to be there.  They will see appreciate the gratitude of the recipient, and I’m sure the recipient will be overwhelmed with the shower of love that this quilt will hold.  If the recipient is out of town, buy or make a card that everyone can sign so recipient is touched by the number of people who cared enough to share in the work to create this special gift.

After all, quilting is all about love, and a friendship quilt is the ultimate way to share your love!

P.S. Here are few examples of good designs for a friendship quilt.  And there are a ton more that you can see if you just google signature quilt blocks. 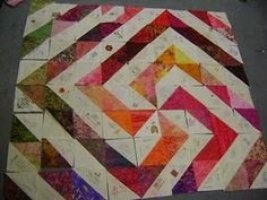 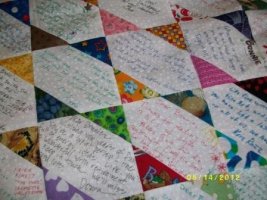 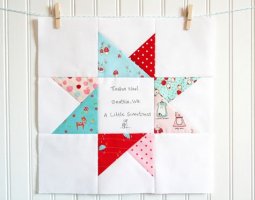 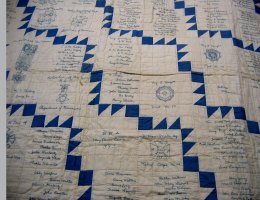 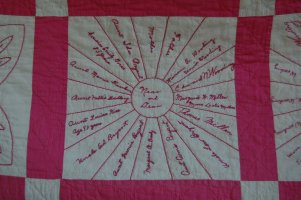 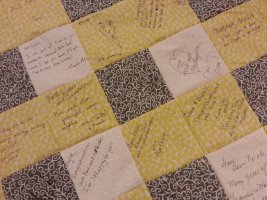 Barb Bergquist along with husband, Ron, own A Block Away Quilt Shop.  A dedicated quilter with more than 25 years of experience, she is now actively sharing her love of quilting through the work in her shop. 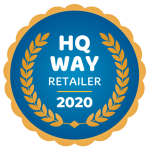